Kigali (AFP) – Lions will return to Rwanda for the first time in more than two decades, wildlife officials have said, after the endangered animal was wiped out following the country’s 1994 genocide. 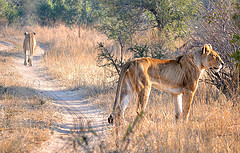 Seven lions — two males and five females — are being transported from South Africa and will arrive by air in Rwanda on Monday after a 36 hour journey, where they will be taken and released after at least two weeks quarantine into the eastern Akagera National Park.

Park officials in Akagera, a 112,000 hectare (27,6800 acre) park bordering Tanzania, said the reintroduction was “a ground-breaking conservation effort for both the park and the country of Rwanda.” Lions in Rwanda were stamped out after the 1994 genocide, which left an estimated 800,000 people dead. Fleeing refugees and displaced people occupied part of the park, with the lion being driven out or killed as people tried to protect their livestock.

“It is a breakthrough in the rehabilitation of the park,” said Yamina Karitanyi, head of tourism at the Rwanda Development Board. “Their return will encourage the natural balance of the ecosystem.” Lions are coming from parks in South Africa’s KwaZulu-Natal province, from “relatively small, confined reserves where it is necessary to occasionally remove surplus lions,” a statement from Akagera added. The seven were chosen “based on future reproductive potential and their ability to contribute to social cohesion”, with animals including a mix of ages and genetic makeup. 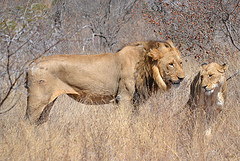 The lion remains listed as vulnerable at a global level, the International Union for the Conservation of Nature said Thursday in an update to its “Red List” of threatened species. Rapid decline has been recorded in eastern Africa, which historically has been a stronghold for lions, IUCN said, warning that trade in bones and other body parts for traditional medicine in Africa and in Asia was a new and emerging threat to the species.

The western African lion subpopulation is listed as “critically endangered” due to over-hunting and dwindling prey. “The return of lions to Akagera is a conservation milestone for the park and the country,” said Peter Fearnhead, head of African Parks, which helps run Akagera. The park is fenced, but the cats will be equipped with “satellite collars” to reduce the risk of them entering inhabited areas. “The collars have a two-year life, by which time the park team will have evaluated the pride dynamics and only the dominant individuals in each pride will be re-collared,” the park added.

Akagera offers plenty of food for the top predator, and is home to multiple antelope species, buffaloes, giraffes and zebras, as well as leopards and elephants. Some two hours by vehicle from the capital Kigali, it is an important tourist destination, with some 28,000 visitors in 2014.